As many of you know, Kelli and I did a lot of quilts for Moda Bake Shop several years ago.  Some of the things you likely don’t know is that Moda Bake Shop isn’t ran quite the way it used to run.  The site has been reworked and can now be found through www.modafabrics.com.  Well through all of this, Kelli and I have been overwhelmed by questions from interested parties wanting the patterns for specific quilts as some of the patterns have been “lost in the archives”.  Well, to be honest, we are wanting to avoid all those emails and requests so we are going to be featuring one of our old Moda Bake Shop quilts or projects each week until all of them are posted here on our blog so we can readily find them and have access to them whenever we want.  These quilts will be archived here on the blog in the free patterns section on the right column.

I made this quilt several years ago as a wedding present.  As I report the pattern for this quilt today, the couple has two sweet little girls.

Layer Cake
Remove the lime, orange and magenta squares from the remaining squares cut 64~ 4 1/2″ squares. There will be a few repeated fabrics and some leftover.

Note:
When you initially look at this quilt, it appears like the quilt features the green star block. That is not true! This is the actual block:

As the blocks come together, they create the secondary green star. Also note the center square of each of the stars features a different fabric.

Start by sewing the black and green triangles together to make half square triangle blocks. You will need 512 total. Press to the black.

Now take a black 2 1/2″ square and pair it with one of the half square triangles that were just created. Sew together as shown. Press to the black square. Now pair the pieces together and sew. Press seam to one side. Set these aside.

To create the hour glass portion of the block take a magenta triangle and lay it on a black triangle. Sew as shown. Press to the magenta. You will need 512 total.

Take a magenta triangle and lay it on an orange triangle. Sew as shown. Press to the magenta. You will need 512 total.

Lay the newly formed triangles on top of each other and sew making sure to match the center seams. Continue until you have 512 quarter square triangle blocks.

Begin assembling the blocks by sewing the pieces into strips as shown.

Sew those strips together to create the block. Complete 64 blocks.

Assemble the blocks into an 8 x 8 layout like this… 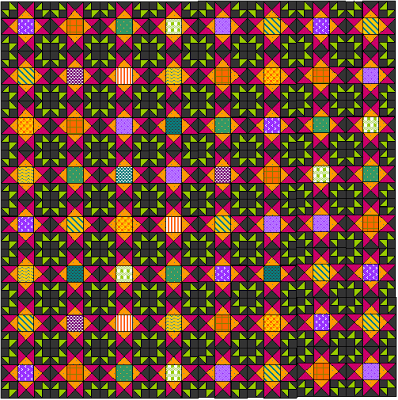 As long as I quilt, it will always amaze me to see the designs created when blocks come together.

This quilt is a bright one but I sure like it!