One of the reasons why I quilted FIVE quilts on the quilting machine last week was because I had a good audio book that I was listening to, The One I Left Behind: A Novel 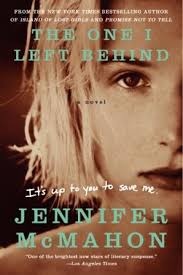 If I find a good audio book to listen to, I will purposely find jobs around the house that I can do so that I can keep on listening.  This was one of those kind of books.

It’s a mystery/thriller/coming of age story.  The book takes place in 1985 and in 2110.  Here’s Amazon’s description:
“The summer of 1985 changes Reggie’s life. An awkward thirteen-year-old, she finds herself mixed up with the school outcasts. That same summer, a serial killer called Neptune begins kidnapping women. He leaves their severed hands on the police department steps and, five days later, displays their bodies around town. Just when Reggie needs her mother, Vera, the most, Vera’s hand is found on the steps. But after five days, there’s no body and Neptune disappears.

Now, twenty-five years later, Reggie is a successful architect who has left her hometown and the horrific memories of that summer behind. But when she gets a call revealing that her mother has been found alive, Reggie must confront the ghosts of her past and find Neptune before he kills again.”

I am typically pretty good at knowing who the killer is when I read a book.  This time, I thought I knew then was wrong, thought I knew again, and was wrong again.  I love the “coming of age” portion of the book too.

After looking on Amazon I saw that this author has more books.  That made me excited as I would definitely try another of her books.   I am pretty careful about how I rate books.  There are only a few books I have ever read that I give 5 stars too.  Those are big time favorite books of mine like “Gone With the Wind”.  This one I would give four stars to and for me, that’s a great rating.

If you’re interested, here is an Amazon link for the book,The One I Left Behind: A Novel

7 thoughts on “What I’m Reading: The One I Left Behind”