I just finished up listening to the audio version of The Nightmare: A Novel 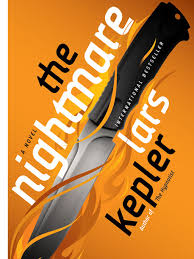 I had read the previous book in the series, The Hypnotist: A Novel

, and had liked it so I decided to read the next.  It was good but I think I liked the first one better…still worth reading if you like detective stories.  I really enjoy this series as it is written by a Swedish couple and set in Sweden.  My grandparents on my dad’s side came from Sweden and I have a bit of fascination with the country.

I love just reading the book, hearing the names of the people and towns in the country.  I know it’s a bit silly and even a romantic view but it’s how I am.

Here’s what Amazon had to say about the book, “After spellbinding audiences in The Hypnotist, Detective Inspector Joona Linna is back in The Nightmare, an internationally bestselling Swedish thriller published to critical acclaim in dozens of countries. As the Swedish newspaper Arbetarbladet put it, “The reader is ready to sell his own soul for the opportunity to read this book without interruption, in one sitting.” On a summer night, police recover the body of a young woman from an abandoned pleasure boat drifting around the Stockholm archipelago. Her lungs are filled with brackish water, and the forensics team is sure that she drowned. Why, then, is the pleasure boat still afloat, and why are there no traces of water on her clothes or body? The next day, a man turns up dead in his state apartment in Stockholm, hanging from a lamp hook. All signs point to suicide, but the room has a high ceiling, and there’s not a single piece of furniture around—nothing to climb on. Joona Linna begins to piece together the two mysteries, but the logistics are a mere prelude to a dizzying and dangerous course of events. At its core, the most frightening aspect of The Nightmare isn’t its gruesome crimes—it’s the dark psychology of its characters, who show us how blind we are to our own motives.”

I would give it four stars….worth your time and engaging…especially if you are like me and like thriller/crime books.

You can find The Nightmare: A Novel

here at Amazon in book or Kindle version.