I just finished up listening to Navigating Early 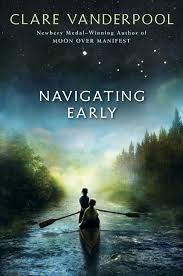 This book has recieved award after award after award so I thought I’d give it a try.  It’s considered juvenile fiction.  The school library journal lists it as kids from grades 5-8 might be interested in it…honestly, I think that’s a little young.  The whole story revolves around pi, you know…  3.14 .  I just don’t think kids in fifth grade know about pi yet.  Of course, I could be completely wrong but it’s just my gut instinct.  Even if you aren’t a math wiz, there is still a lot of story to catch.

Here is what Amazon has to say about it, “At the end of World War II, Jack Baker, a landlocked Kansas boy, is suddenly uprooted after his mother’s death and placed in a boy’s boarding school in Maine. There, Jack encounters Early Auden, the strangest of boys, who reads the number pi as a story and collects clippings about the sightings of a great black bear in the nearby mountains. Newcomer Jack feels lost yet can’t help being drawn to Early, who won’t believe what everyone accepts to be the truth about the Great Appalachian Bear, Timber Rattlesnakes, and the legendary school hero known as The Fish, who never returned from the war. When the boys find themselves unexpectedly alone at school, they embark on a quest on the Appalachian Trail in search of the great black bear. But what they are searching for is sometimes different from what they find. They will meet truly strange characters, each of whom figures into the pi story Early weaves as they travel, while discovering things they never realized about themselves and others in their lives.”

Amazon readers give it a rating of 4.5 stars.  I think I would be a bit more conservative and just give it 4.  It was a good though…just not as good as some of the others I have listened to lately.