Here’s my latest read, In the Sanctuary of Outcasts: A Memoir (P.S.) 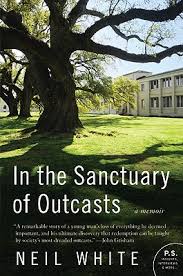 I listened to the audio version and Taber Burns was the reader.  Her was wonderful!!

Here is what Amazon said, “A remarkable story of a young man’s loss of everything he deemed important, and his ultimate discovery that redemption can be taught by society’s most dreaded outcasts.” —John Grisham—-“Hilarious, astonishing, and deeply moving.” —John Berendt, author of Midnight in the Garden of Good and Evil—The emotional, incredible true story of Neil White, a man who discovers the secret to happiness, leading a fulfilling life, and the importance of fatherhood in the most unlikely of places—the last leper colony in the continental United States. In the words of Pulitzer Prize winner Robert Olen Butler (A Good Scent from a Strange Mountain), White is “a splendid writer,” and In the Sanctuary of Outcasts “a book that will endure.”  It did get four stars from Amazon readers.

That doesn’t really give you the meat of it.  Here’s my version.  This is a true story about the author.  He was imprisoned for bank fraud into Carville Prison.  At the time, the only colony of lepers in the U.S.A. where being housed there.  There is a vivid cast of characters throughout the book of both prisoners and lepers.  The author really needs this break in his life to slow down and access what is truly important.  Money means nothing…things mean nothing.  Relationships mean everything.  I actually learned a lot about leprosy while reading the book too.

It is a very good book.  I would give it four stars.

While writing the review I found a Youtube video from the author telling about the book.

If you are interested here is the book version In the Sanctuary of Outcasts: A Memoir (P.S.)

and here is the Kindle version In the Sanctuary of Outcasts (P.S.)