Karl was home this weekend and he brought his girlfriend Renee.  It was our first time to meet her.  I’m happy to report that she fit in wonderfully and was very pleasant.  Karl seemed happy and that is the best.

We had Betsy, Kalissa’s dog, and Renee brought her dog Hope with.  I didn’t know how it would go with Hope.  She’s blind in one eye and is deaf.  I didn’t know how she’d be in a place that she isn’t used to but she did really well and is an awesome dog.  On Sunday they took the dogs and went on a walk. The Neighbor Girl was over and she made us French Toast with a little help from Karl.

Later on, Karl and Renee left.  That gave Neighbor Girl and I time to sew.  On her agenda was machine quilting.  She wanted to machine quilt the top she made while Connie was at my house sewing.

I gave her the white board and marker, along with a design idea and set her to practicing. Here’s how she did. Not bad for a first timer.

Once I got her set up on the machine she went a little crazy though.  She told me she changed her mind and wanted to do a different design instead.  I told her to do whatever she wanted.

Here’s her masterpiece.  She was a little disappointed that it isn’t actually done-done. She tried to convince me that she wasn’t going to bind it but I told her nope.  She had to learn to bind.

Here she is showing off the backing fabric.  The fabric was scraps that a blog reader had sent.  Neighbor Girl pieced them together to make a big enough backing.  The charm squares for the top were also sent to us by a blog reader.  THANKS!! I’m trying really hard to suggest resourceful things and thinking outside the box.  Piecing the backing was the perfect play for that.

As soon as the piece was off the machine she immediately asked if she could do another one.  I pointed out to her that she would need to sew another quilt top first.  She wasn’t too happy about that reply.  She loves the quilting machine…but isn’t she like all of us quilters.  We all think about our next projects before the first one is even finished. 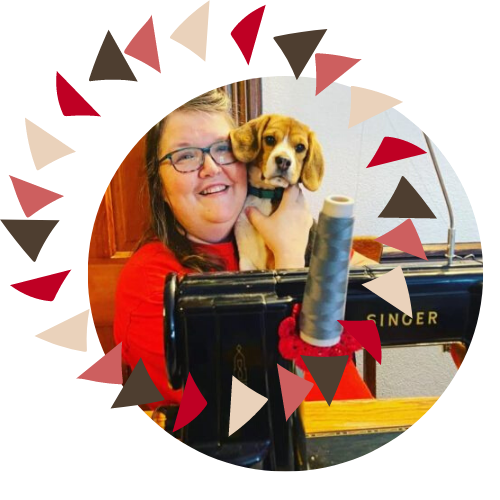