I have told you before that I am not a real television fan.  Part of the reason I don’t really like it is that everything is so sexual.  The comedy is sometimes plan gross and leads people to think everyone lives their lives that way.  With the drama…it’s all sexual too.  No one in the shows has any moral compass.  It’s just gross as far as I am concerned.  I can’t relate to the characters because most of the time, what they are doing is something I would NEVER do….and reality TV-I don’t typically go there either.

I have found myself  watching television a little more lately though.  I’ve been watching a bit of ME TV.

Hubby and I were laughing right out loud the other day…first it was MASH.

Then it was Hogan’s Heroes.

and then it was Rhoda. 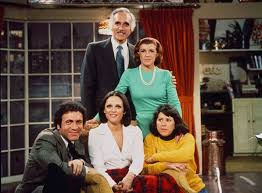 Oh I miss shows like this.  If  TV was still like this..I know I would watch more.  I miss clean humor.  Sure there are implied things..but not disgusting things.

We do watch a few crime shows…Cold Case…Criminal Minds…but for the most part, if I’m watching television, it’s ME TV.  I am guessing there are cable shows that are also providing viewers with some decent shows to watch but for those of us who are cable free…it’s ME.

So do you watch retro television and if so, what show would you like to see come back in reruns?

21 thoughts on “The State of Television”