The Kitchen House by Kathleen Grissom

This story takes place on a southern plantation before the Civil War.  Lavinia, a seven year old white girl immigrating from Ireland, is “given” as an indentured servant to the ships captain when her parents die while coming to America.  She is immediately taken to the kitchen house where the Negro servants are told to take care of her and see that she starts working.  Belle, the captain’s illegitimate daughter, who is in charge of the kitchen house quickly because a mother figure to Lavinia.  The book covers many years…and in the end it was a tear jerker…at least for me.

The City of Thieves by David Benioff 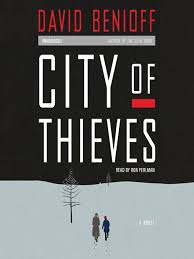 This story takes place in Leningrad, Russia, during the WWII siege.  Seventeen year old Lev is unjustly arrested after looting a dead paratrooper’s body.  He is taken to jail where he meets a Russian Army deserter, Kolya.  The captain spares their lives under one condition.  They must bring him 12 eggs so that his daughter can have a cake at her wedding.  The oddly matched pair sets out on their mission, knowing it is a daunting task and their chance of success is limited.  Along their adventure, they meet many unusual characters as each of their stories unfold.  This book had me sniffling and left in awe of a person can live through.

Letters from Rifka by Karen Hesse 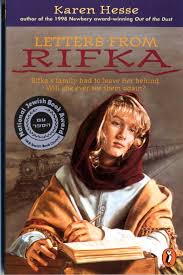 This is classified as a juvenile fiction book but still very well worth a read…or listen.  Rifka, a 12 year old Jewish girl, tries to escape with her family from the Ukraine and to come to Ellis Island in America.  The family meets difficulty after difficulty, being split apart, and facing death.  Through Rifka’s letters to her cousin back home in the Ukraine, readers learn about the conditions Jewish families faced while living through that turbulent time in history.

All of these books totally kept my attention.  A couple times I even found myself purposely sewing because I wanted to listen to the books and find out what was happening to my characters…for me, that says a lot.  I listen to all of my audio books through my library’s on line lending library….I absolutely love it.  I can listen to them on my computer or on my MP3 player.   Several months ago the online library also started offering books that can be read on a Nook or Sony Reader….

I am hoping one of my kids will tell their dad that I want one of these for Christmas….Kids, are you reading this?