It’s probably not a big surprise that I enjoy watching medical shows. Obviously my favorites tend to be much more towards realistic. Some of my favorites were Boston Med, New York Med, and Boston EMS. The premis of the shows is that you pretty much shadow a nurse or ambulance crew and get an inside look at the kinds of things that they deal with in large trauma settings. The EMS show follows an ambulance crew while responding to 911 calls. Some are actual emergencies while others aren’t so much.

I dont really like ones like Untold Stoies of the ER. This one is completely staged and pretty horrid. You can tell that everything is completely embellished. The voice overs that narrate the show pretty much just repeat what the main characters have already said. Those I’m definitely not a fan of.

I’ve always enjoyed Greys Anatomy, but over the past few seasons, I feel like they’re taking any possible idea and using it. And if you’ve been watching lately you know that they’ve killed off lots of main characters. It also seems that they are making a few more errors like shocking an unshockable rhythm and pronouncing very common medication names incorrectly.  Any more, I watch it more for something to do and because I’ve watched it so long.

My favorite though, so far anyways, has been ER.  When I was in nursing school, we watched a short segment about a 17 year old who had cystic fibrosis.  He requested to be a DNR and did not want to be intubated.  When he was admitted, he lied to staff saying that he was over the age of 18, thus responsible for making his own medical decisions.  They ended up calling his mom as an emergency contact and finding out that he was under 18 and that she wanted him intubated.  It showed the struggle between what the law is and individual morals and wishes.  From then on, I have been trying to watch old reruns because it seemed like it was less for drama and more for showing medical techniques and showcasing information about different diseases. 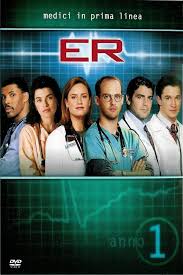 You can imagine my surprise when one day I turned on my Hulu and there was ER!  I was so excited that I called mom and told her about it.  She said–“Oh we used to watch that one after we would put you guys to bed at night.”  It was a moment where you realize that your parents are actually people and had a life besides you too.

One of the things that I’ve found interesting is the advances in medication that have happened since the show first started to now.  There have also been a few instances where treatments and things are stretched a little bit with some pretty heroic outcomes, but for the most part, people still die and things don’t always turn out for the best.  I like this because that’s what medicine actually is.  The further along that I get in the seasons, theyve been sneaking in more and more drama, who’s sleeping with who, and things that don’t really seem overly relevant to the storyline, but it’s a TV drama.  And it’s still my favorite.

So–Do you have any medical dramas or shows that you like that you think I would?  Bonus if you know they are on Netflix or Hulu…because I don’t have regular TV.