I told you in a post months ago that I was liking the series “The Killing” on Netflix.  At the time I wrote about it I was about two seasons in.   So at the end of July I had binged watching about five episodes while cross stitching over a weekend.

I loved the series.  It’s a cop show with a big murder each season and it takes the whole season to solve the crime. 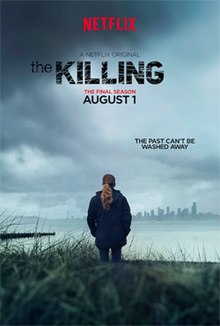 The actors were not all drop dead gorgeous.

They were flawed people….I kind of liked that until the last season…but there I was, already deep into it.  I had to find out what was going to happen.

Did this boy kill his parents?  Would the the hidden crimes of others be found out?

So about two weeks ago Kelli was home.  I told her all about how disappointed I was that “The Killing” was taken off of Netflix.  I watch it so little that I really wasn’t even aware that they add and take off shows on a  regular basis.   Kelli being the “series watching savvy girl” knew just what to do.  Before long she had purchased the final episode for me.  Then a week ago I finally got a chance to watch it….and….BUMMER.  I wish I hadn’t seen it.

I hated how the show ended.  HATED IT.  The last show ruined much of it for me.  UGH.  I couldn’t believe how they ended it.  There wasn’t the chemistry there for the ending that came.  Ah.  Disappointment.

Don’t you hate that when it happens???  I feel like they had to end if and couldn’t think of anything else.  So what’s a girl to do?  I’m trying really hard to ignore their ending and write my own in my head.  Have you ever done that???

Nope, nope, nope…should not have happened.

And with that, I’m moving on to something new….and that new series is “A Place to Call Home”….but it’s not on Netflix and a whole story for another day.