Kelli and I have had what I’d call a frustrating experience with planning the retreat when Bonnie Hunter is coming in August. 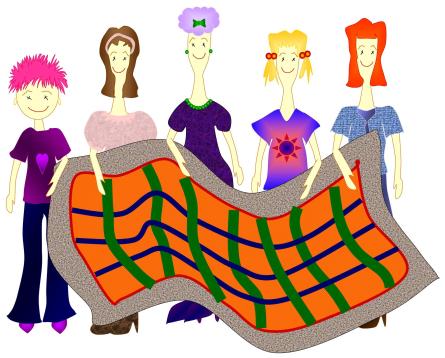 Here’s some of the things that have happened…..

People have been calling our phones.  I don’t know how they have gotten out numbers but we have had people calling our homes.  For me, it’s while I am working and have childcare kids here.  I’m sure the lady thought I was rude but when kids are here…they are my priority.  One time when a call came in we were out on a girls day.  We were having private family time and we got a call.  Here’s the kicker…the person had email earlier in the week TWICE.  I had answered the emails.  Still they called our personal phone because they thought for some reason that that their ticket into the retreat was talking to me personally.

We have gotten emails from people who were mad at us because we didn’t send info to the person’s friend on the same day we emailed their information because they were planning on riding together.  How can we know who might be riding together?  We don’t know who is and who isn’t friends.  This has happened LOTS!

We have gotten emails from people mad because their desired location was full.

We have gotten second and third emails from people mad because the email they sent earlier in the same day wasn’t answered yet.

We’ve gotten emails from people who asked the retreat owner to “get them in”.  Dropping her name telling us they should get in because they shopped at the quilt shop adjacent to the retreat center.

We have had people who have accusingly said that we sent information to someone they thought was on the list after them.  These people quoted they day they first inquired about the retreat…

We have gotten emails from a quilt guild wanting us to “rent” Bonnie out while she was here and have her go present one night to their guild.

We have had other strange guild related emails….

After sending emails that weren’t answered immediately people have then sent messages us on Facebook too.  The problem with that.  On Facebook their name is “Jane Doe”.  Their email is sent by “BobandJane”.  We have no idea they are the same person so our work is doubled because both messages have to be answered.

These are mostly people who don’t read the blog and don’t know us….yet we are supposed to drop everything for them simply because they want to see Bonnie.

Here are some things we would like everyone to know.

We also want you to know this…
We are human.
We have jobs…full time jobs-plus some.
We want to please as many people as we can and want this to be an enjoyable experience for all.

In the mists of these last few days Kalissa needed help.  Carver is sick.  We have had an ice storm here.  Kelli’s husband had to drive Kelli to work.  He dropped her off.  She worked a 12 hour shift only to find others couldn’t get into work.  She worked another 4 hours.  She tried to sleep at work and couldn’t.  She was up after a few hours and was back working again…another shift.  Her Hubby picked her up.  She went to sleep and now as you are reading this she came to my house to finish watching my childcare kids so that I could attend a funeral.  From here she’s going to Kalissa’s to help her-then to bed only to wake early and make a 2 1/2 hour drive to take her nursing boards test.  All of these things are WAY more import to us than the retreat.

As you can see….we have other priorities right now.  Kelli knows her inbox is full but at this point, there is nothing she can do about it.  Life is happening.

One of our VERY favorite parts of the whole experience so far has come from one of the nicest gals I know…Ana Sweet…Ana had attended the retreat last time so she had first opportunity to come to this retreat.  Ana sent us a message that said, ” I would love to come but will let someone else who has not taken Bonnie’s classes get a chance. It was a blast.”  That’s exactly what we did.  We found someone who hadn’t seen Bonnie before come.

Thanks Ana for being a ray of sunshine!!

Right now, this is how Kelli and I feel…..

All of this planning and emailing takes time.  Some people don’t respond right away.  Who knew a quilting retreat would be stressful to plan?  Last time was interesting but this time it’s been really bad.  We keep telling ourselves…just a few more days…just a few more days.