Hubby has been working in the garage.  As much as he should be working on refinishing the trim, I ask him to do something else instead.

Remember that big cabinet Hubby and I got for free last summer at an estate sale?  This one?

Well there’s a beauty under that beast and I really want it in my dining room.  When we picked it up it started out that we’d sell it as is….then we both fell in love with it.

Then I started trying to think of somewhere in the house I could put it.  We settled on the quilting room.  We’d strip it and I’d use it as a cutting table.  I wasn’t in love with the idea of it being in my sewing room as space isn’t the best for it but I didn’t care.  I didn’t want to sell the cabinet and unless I came up with an idea, that’s what was going to happen to it.

Then one day Hubby and I were driving down the road.  I had been lamenting how hard it was to incorporate some modern or trendy looks with the antiques we have.

I’ve loved this type of shelving … 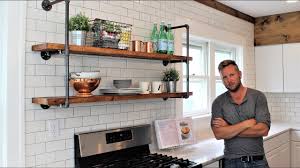 But how do I made that work with the antiques I have.  That’s when it hit me.  The cabinet could go in my dining room and this type of shelving could go above it.  YES!!  I loved the idea.

So driving down the road I mentioned it to Hubby.  The reply was (grumble-grumble) “I don’t think that will fit (grumble-grumble).  UGH.  This might take some work on my part and I don’t mean sanding and stripping the piece.  I mean convincing Hubby it would work.  I’ve been married to him for almost 32 years…I know how to deal with him and his grumble-grumbles.

With Hubby not seeing me I measured the dining room wall space.  YES!  It would fit perfectly.  Game on.  I was going to figure out how to get him on my team!  (I’m sure all of you do this too)

I let it all sit for a bit and then one day a week later he was on the computer.  In front of him I grabbed the tape measure and measured the space on the wall.  He asked what I was doing and I said I was going to see if the cabinet would fit there.  He told me he already figured out it would.  (WHAT??)  That sneaker.

Then he told me about his great idea.  He was thinking about those cool pipe shelves that I had showed him on the internet.  He thought is would be so cool to put them above the cabinet.  I swallowed my own grumble-grumble and told him that I loved his idea!!  UGH.  Then I shut my mouth…and there you have it.  He’s refinishing my cabinet and making me the pipe shelving…and I’m biting my tongue (in between my smiling lips)  I really don’t care whose idea it was.  I’m just so incredibly happy that it’s starting to happen!!

So here’s how far he is in working on it….The drawers are all out….

He has all the drawer fronts sanded.

He’s been giving the sanders and his work station a real work out.

He’s ran into a few problems…but most of them are getting solved.

The drawers have a routered edge to them.  It’s hard to get that stripped.  Craig, Kalissa’s husband has recently bought a router.  He’s going to router the edges taking off the paint….at least that’s the plan.

Next up Hubby needs to make a cabinet ddor and three drawers at they were all missing when we got it.

All I know is that I am completely and totally THRILLED!!!  It’s going to be quite awhile before it’s finished.  I had wanted to go out in the garage and help but my cough isn’t completely gone and saw dust has me coughing.  I’m admiring from afar for now.

I’ll keep you posted as we get closer to a finish with this.  I can’t wait.

11 thoughts on “In the Garage”