Before I share my stitching this week I thought I would answer a cross-stitch question that came it.

Wallace asked:
“Your work is lovely!  I do cross-stitch in the fall and early winter…but have never seen patterns like these. They have a beautiful antique feel to them. I especially love the background cloth (so much nicer than the standard white that comes in kits).
Do you have any tips on where I could find similar things?”

Cross-stitch is typically done on either Aida or Linen types of fabric.  I used Aida in the ’80s and ’90s for cross stitch.  I didn’t know there was anything else.  Aida is like this…

It’s easy to see the holes.  It’s obvious where to put your needle up and down.  When stitching on this you simply make an “x” as shown in the first stitch on the left.

It does come in other colors and has gotten to be MUCH better and nicer than what I stitched on in the ’80s.  The one below is sold through Amazon.  You can find it HERE.  Aida is not expensive.

For the more primitive look, you’ll want linen.  It is harder to stitch on, but I love the look and it’s worth it to me to stitch a little slower.  Here is more of what linen looks like.

The reason it is slower to stitch on linen is that you need to count two threads over when making your “x”.  Look at the photo below.  On the left is Aida cloth.  On the right, linen.

The strands of linen aren’t always a uniform size so that makes it harder too.   They have come out with a fabric called evenweave.  It is similar to linen only the threads that make it up are all uniform in thickness.  If you’re new to cross stitching on linen.  Evenweave is a good option. 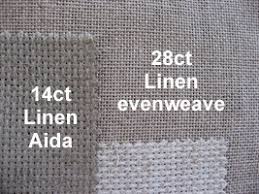 Often on samplers the words are stitched over one but not always.  Over one is harder and more tedious as you don’t see much progress quickly.  It is doable though.  I don’t suggest it for a first project.

What got me back to cross stitching was that I discovered linen.  I liked the more primitive look of linen and I loved all the options of colors…

I saw this little piece by Lizzie Kate.  It was unlike anything that I had seen.  I was bound and determined that I was going to stitch it.  I wanted it to look like the picture and it was stitched on linen so WATCH OUT WORLD.  I was going to do it on linen even if it was harder than Aida.

This chart is what brought me back to cross-stitch.

There are mistakes in this but I don’t care.  I’ve still pretty proud of it.

My favorite linen is Vintage Country Mocha.  It has a mottling between the two colors shown.  You can get it on any count of linen or Aida.  It is the easiest linen that I have worked with.   It seems the most versatile too.

As far as stitching goes….I’ve learned to “do the sewing method”.  You can watch this video to learn more about that.

When I first started I did this method where the stitcher does the first slant of the “x” all the way across and then comes back and does the second slant.

I do the sewing method now like the video shows and like my stitches MUCH better.  Try both and see what you think.

Here are some shops online that I recommend
Needlecase Goodies on Etsy
Nancy owns this shop.  She is local to me and has fast reasonable shipping.

123 Stitch
I don’t like them as well as other places but they sometimes have stuff if I can’t find it at the other two places.

You can always google to see if a shop is close to your area.  I have two that are an hour away from me.  I really like The Stitchery Nook in Osage Iowa.  They also have an online presence.  I’ve had good luck getting thread from them when I couldn’t find it elsewhere.

Pat in Michigan asked:
“How do you press/iron the linen to remove the wrinkles, but not risk any of the threads bleeding. Thanks for your advice.”

Well, I just go for it!  I press from the back and use a light flour sack dishtowel that is pretty worn on top of the cross-stitch piece so I don’t directly iron it.  I do use the wool pressing mat…  THIS ONE.

If you aren’t familiar with the mats, the wool obsorbs the heat so the object gets heat from the mat and for the iron.  I love mine.

I do spray a little spray starch on it if I can’t get the wrinkles out.  I know it’s not recommended but I haven’t had a problem yet.  That’s just me and I don’t want to say that’s the right way and have you ruin your cross stitch piece… but yes, I do use a light spray with spray starch.  THIS is my preferred spray starch.

Now onto what I’ve been stitching…On Thursday night I pulled my Anniversaries of the heart out and started stitching on that.  Remember I really want to get two blocks done this month?  I was so happy.  By the end of the night, I had gotten this far.

So the next night I decided I was going to rip it out and start over.  This time I started on the upper right and stitched making sure that the first stitch I put in was even with the border of the block above.

It worked.  That night I got the border I had done restitched plus a little extra stitching in.

Whew.  That was a bummer but turned out okay.

Here is where I ended up with my Anniversaries of the Heart piece.

I didn’t get very far as…
1-I screwed up the one day and spent most of the next day ripping out what I stitched the night before.
2-I watched a movie that was mostly in French one night and had to read subtitles.  It was a good movie so worth it…but, had I watched something in all English I could have stitched more.
3-I never stitch quickly on anything that is symmetrical…the butterfly and the tree.  I don’t know why.  I just don’t.

Someone commented about my last month’s block.  This one…

They asked about my mom’s name.  It is pronounced Ev-a-loni.  She went by Lonne.  Kelli wanted to name one of the babies that if the twins had been girls.

I finished stitching the Valentine piece. It is a freebie chart from The Primitive Hare.  I need to sew it into a pillow now.

I got very little stitched on A Changed World.  I did the yellow flowers in the band and then I did the tips of the flowers in black.  I extended the side borders and filled them all in with the white and blue.  I started the next band.

I only stitched on this one evening so that wasn’t terrible.  I’ve really been in the mood to quilt more than stitch…and I’ve been doing just that.  It’s not a race so that’s totally okay.

That wraps up the latest cross stitch post.  I’m hoping I take a little time this weekend and stitch the Valentine one into a pillow.  It would be nice to have something fully finished!!