I’ve had a time of things lately.  Summer was crazy with childcare.  Most of my little were part time then and I had several kids that were preschool and school aged.  It was crazy but do-able.  I had a nice childcare summer.  I was hard pressed to do any artsy activities with them but I balanced that off with LOTS and LOTS of outside time.  Most days we were out for 1-2 hours.  This kids loved it…I loved it.

Fast forward to fall.  The big kids went to school and all of my littles switched their hours to full time except one that’s no Fridays.  So I’ve had seven littles most days.  All the kids that I was once changing diapers on, were now moving to potty training.  I have two girls that are the oldest and five boys….right now, I’m training three of the boys at the same time.

The kids range in age from 18 months to 32 months.

Two of the boys got into a biting stage….all of them are at a hitting stage….all of them need more words and ability to express themselves without their hands.  It’s been miserable for me.  I would get in the bathroom with two to go potty and all #*#* would break loose and there would be screaming in the other room as someone got bit.  Then I’d get back to the bathroom and someone peed all over the floor.  It really was that bad….or I’d take someone potty and I’d come back and someone opened the back door to let Ruby in and the littlest one went outside while the door was open.  I also have three of the boys who like to simply run through the house screaming.  So I’d be taking someone potty and the screaming would start, I’d fly out of the bathroom only to find they were just running through the house screaming and no one was hurt.  That was a relief but trust me…ANNOYING.

It was too much.  I couldn’t take time to talk through the problems we were having.

If I sat down to read books to the kiddos, it would turn into at fight.  Someone would push as there wasn’t room on my lap…and hair pulling started too.  Someone would cry because someone else took “their” book out of their hands while they were holding it.  It was miserable.

I no longer felt like I wasn’t taking care of the kids the way they needed to be taken care of.  Originally when I accepted everyone when they were little I thought having lots of kids the same age would be awesome.  I’d have all these kids about the same age.  But now that they are at the toddler stage, it’s terrible.

I was totally dealing with a lot of this….

On top of that….Carver is here and he thinks I am his.  Truth is I am his, but it can’t work like that during childcare hours.  He’s been having an extra tough time with this all.

I tried to hide it but I was starting to feel like this….

I started reading the paper and looking at the Want Ads….

Something has got to better than this….Then I remembered that no.  I do love childcare.  I just don’t love it like it is now.  So I decided something had to change.  The how it would change..I didn’t know.  I just knew it had to change.

I talked to Hubby about it.  I talked with Kalissa about it.  Both of them know the kids and dynamic of it all.  Neither really gave me a opinion…they just listened.  I finally decided that I think I just needed fewer kids.  All of the kids moving to full time was a lot.  I originally thought it would be easier but it has proven not to be.  Last school year I’d often have five kids a day and maybe six now it was seven every day.

Then my next problem…the only way to lessen my load was to ask a family to leave.  That is thee hardest thing to do.  I hate having to do it.  I always worry that the family will feel rejected.  There’s a shortage of providers around here so that doesn’t help either.  So how do I pick??!!

I talked to Hubby and he listened to my train of thought.  Some families started as full time….some as part time.  I always give highest consideration for my own grandchildren and then to my full time families.  I considered cutting my four day a week family and decided that wouldn’t work as keeping them would allow me to keep Kelli’s baby once it comes on Fridays.  Kelli lives far enough away from me that full time care isn’t feasible but a day a week is.  So, that means that family would coordinate well later on with Kelli’s baby.

Then I decided that I’d go with the family that asked for full time last.  I don’t know how else to be fair.  So I talked to them.  I didn’t feel good about it at all but honestly, there was no choice.

I spent a day or two feeling miserable about it…but then this came up in my Facebook feed…. 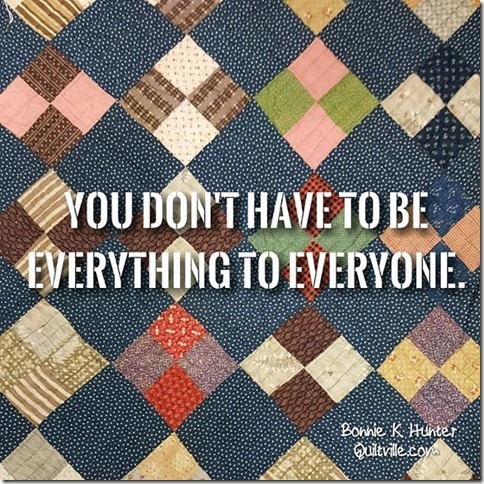 It was what I needed to see.  I really can’t be everything to everyone.  I knew if I could feel a little less stressed at work, it would be beneficial to all of the kids, to Hubby and mostly to me.  Will this solve all the issues?…no-not completely.  Part of this is the stage the kids are in.  But cutting back, I really think will help.

My hope now is that this all gets settled before babies come.  Of course there will always be a few challenging situations and behaviors but if we can get over this toddler hump, it will be awesome.

The truth of the matter is that I was going to have to let a family go once Kalissa’s baby came anyway.  I just ended up doing it sooner to save a little sanity.

I’ve had a couple days now with fewer kids.  Oh my.  I needed to make the change.  It’s so hard.  So hard.  The tension and stress isn’t worth it though.