I was late to the party but I finally watched… END_OF_DOCUMENT_TOKEN_TO_BE_REPLACED

A bit ago I told you that my “Jo Bucket” was empty.  I was referring to “me time”.   I hadn’t been getting much time to myself.  I also don’t get a lot of Rosie time….at least not hanging out time.  Most of our time is spent with telling telling her no.  We don’t get a lot of good plan snuggle time.  So in light of that, I decided to do what I can to get some “Jo time”, “couch time”…”stitching time”…”Rosie time” all wrapped up on one.  To do that I am cross stitching.  I decided that at 9pm on many nights, I’m going to sit on the couch with Rosie, watch TV and stitch.

I told myself, nothing good can happen here after 9pm so I’m giving in and stitching.  (as a teen my parents said that about midnight…nothing good could happen after midnight)  Whatever I didn’t get done for the day can wait until tomorrow.  I’m sure this won’t be an everyday occurrence but I’m going to make a serious effort to make it happen more often.

Last night I didn’t get there until 9:30pm but that’s an improvement and I’m going to take it.

So what have I been watching….

On Netflix I watched The Pharmacist. 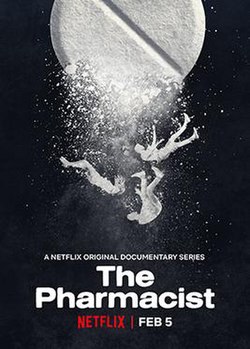 It’s a very interesting docudrama on a couple different levels.  There are personal stories that come together to that tell about the opioid crisis.

Here is the synopsis from IMBd:
“In 1999, after losing his son in a drug-related shooting in New Orleans and lacking answers from police, a small town pharmacist – Dan Schneider – beats the odds when he embarks on a dogged pursuit to find and bring his son’s killer to justice. But months later, the ripple effects of his son’s addiction and tragic death would find him again when a troubling number of young, seemingly healthy people begin visiting Dan’s pharmacy with high dose prescriptions for OxyContin. Sensing a crisis long before the opioid epidemic had gained nationwide attention, Dan stakes a mission: Save the lives of other sons and daughters within his community. Then take the fight to Big Pharma itself.”

….and the trailer.  If the trailer doesn’t show up for you you can find it HERE on Youtube.

The show was tragic but good.  I admire a man with conviction to change things he can see are not good with the world.  Living in rural NE Iowa in a small community, I don’t end up seeing a lot of prescription drug addiction.  I know when Kramer was sick and needed opiods for pain management we were put through many precautions and lots of hoops had to be managed to get them.  Now I see more clearly why the hoops are needed.

I recommend the show.  It’s only 4 episodes and I think run time is 215 minutes for the entire series.

The next show I started watching but I’m not done with is….. END_OF_DOCUMENT_TOKEN_TO_BE_REPLACED

When I had the flu and was on the coach for a day and half, I got in some TV time.   By the afternoon of the first day, my headache had lessened and TV watching wasn’t too bad.

I finished up The Victim.  I had started the series over Christmas break but only got through one episode.  I had planned to get back to it eventually but hadn’t.

I finished it while I was sick.  It was only 4 episodes.

Here’s the overview:
“On the night of Halloween, father and husband Craig Myers is brutally attacked, leading him to discover that an online post has accused him of being the notorious child killer previously known as Eddie J. Turner. An investigation into the attack and the post casts suspicion on Anna Dean, whose son was murdered 15 years prior. She is accused of conspiring to have Craig murdered. The emotionally charged court case that follows gives a glimpse into Scotland’s unique legal system and calls into question the traditional labels of victim and accused.”

At the start of the show, I believed Craig to be the victim….by the end of the show I was having trouble not seeing everyone as a victim and I think that is the premise of the show..but WOW.  It was amazing to see how one crime could ripple out and drastically change the lives of so many people.  I watched this on Britbox.

I didn’t want to start another series…instead I switched over to Amazon Prime and watched two movies that have been on my list that I wanted to watch.  I actually had to rent them both.  The first was…. END_OF_DOCUMENT_TOKEN_TO_BE_REPLACED

I’ve been in the living room a little more as of late.  With Rosie here I haven’t done much in the sewing room.  I moved my Featherweight to the main floor and have been sewing from there.  I’ve also been doing a little more snuggling and that means time on the couch…and that means more TV time.

I finished the recent season of The Crown on Netflix. 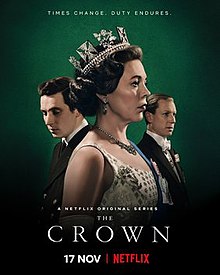 Oh my…I loved it.  I need to remind myself not to speed through a season and savor it.

Olivia Colman is now playing the part of the queen.

I watched her in Broadchurch and loved that series.  She does an amazing job in this series.  Check out this real picture of the queen compared to the actress.

I have to say that I previously didn’t think much of Prince Charles.  He seemed so plain.  I hated that he married Princess Diana and then didn’t make a marriage of it.  (I know she didn’t either) Somehow watching this and seeing some behind the scenes things, I have a lot more respect for him….I’m hoping the show is accurate as to what happened.

If you’ve not watched The Crown, I highly recommend it.  The show has had me Googling for more information on the monarchy…it’s a good enough show that it makes me want to know more.  I would sincerely like to scream at the writers, “SLOW DOWN- You are telling the story too fast.  I want many more seasons of this and if you keep telling the stories so quickly, there won’t be many more seasons”.  The show has fast forwarded through 25 years in 2 seasons.  Ahhh..It makes me a little sad.

I’ve watched a few things on BritBox. 15 Days came up as a recommended show.  I gave it a try.  Here’s what I thought of it…. END_OF_DOCUMENT_TOKEN_TO_BE_REPLACED