Hello, and welcome to another edition of “Ask Jo”.  I get many comments and questions from all sorts of places, the comment section here, Youtube, email, and from our Facebook group.  Sometimes I think others of you might want to know the answers as well so I answer them here on the blog.   Today I’m answering one question from Paula.

Paula asked, “What is a dough bowl?  You had mentioned it a time or two.”

Can you believe I wrote a whole blog post and answered this question only to find out the post got completely lost.  UGH.  So, I wrote it again…

I have long had an obsession with dough bowls.  Back when I first became interested, Kramer and I were going to auctions.  I first learned about them in the 90s and I watched for them all the time at auctions.

The sad news…they would sell for over $200.  We had five kids at home to feed and cloth and neither of us had high-paying jobs so, a dough bowl never ended coming home with us.  They were just out of my price range.

I loved them though and continued to look.

Fast forward to 2015 or so and Joanna Gaines and the whole “farmhouse look”, dough bowls have become the rage.

Now people are making them and they are easy to find.  Here are some of the things people are doing with them…

They work wonderfully for centerpiece decorations.  They are low profile and can easily be switched up for the season or the look that people are going for.

When they started being manufactured in the masses, I debated about getting one.  Part of me wanted an antique but now they were closer to $300 when I’d see them on auctions.  If I really wanted one, I could afford one but it seemed silly to me to spend that much money.

Historically the bowls were actually used for making bread.  I think then people didn’t have the counter space and water right at the faucet for easy clean up so women had dough bowls.  This way they could knead and prepare the bread but keep the mess confined to one place. They could move the bowl closer to a warm spot so the dough would rise better.

I had kind of given up on a dough bowl until I started watching more of floss tube and seeing how others were displaying their cross-stitch.  Check out this…It was shared by Plum Street Samplers. 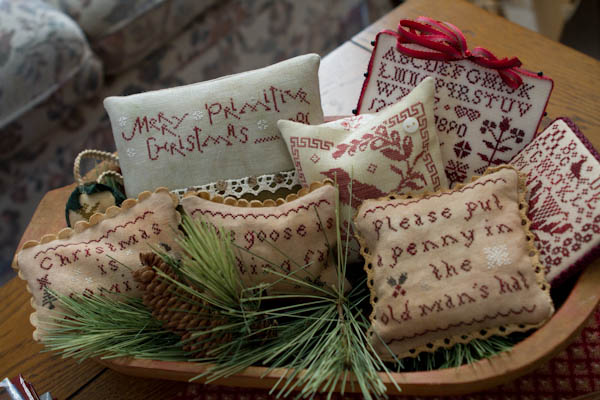 Yep, seeing that was all I needed to want a dough bowl.  But where could I put one?

Decorating in a house that is regularly visited by both grandchildren and childcare children is not easy.  Everything has to be child-proof.  Whenever I put anything anywhere I always have to remember, is it safe for whoever else is here if I am in the bathroom changing a diaper on a baby?

I decided I did have the perfect spot…On top of my cubbies in the livingroom.  It’s just tall enough that the kiddos can’t get into it.  Those that can reach it, are old enough to know better.

I started looking for one…

There were many options and many sizes.  HERE on Amazon.

None were really what I wanted.  I decided I was ready to break the bank and get a long one that really fit the space perfectly.

Then at Christmas time, I told Kalissa I wanted one.  She got me one…but it was a little one.  I’ll admit to being slightly disappointed at the time.  It was small.

I have since come to LOVE it.  I use it for cross-stitching.   You can find it on Amazon HERE.  I keep my scissors, glasses, the remote, and often my phone…you know, all the things that slide into the couch under the cushions.

But, I still didn’t have what I wanted.  I wanted a big long one for the top of the entertainment center.

After MUCH looking, I saw THIS ONE on Etsy.

I took it out of my cart.  Two weeks more passes and the dough bowl was still in my head.  I had spent more time looking for another the same size only cheaper.  UGH.  No luck.  I finally just bit the bullet and bought it.

Here it is on the cubby.  It’s perfect…exactly what I wanted.  I don’t have it decorated yet.  I need to make some cross stitch small pillows for it…but I did get some filler stuff.

I need to make a table runner to go under it.  It will all happen but with everything I do, it’s slow progress.

I love it as it’s low profile.  It’s just a simple little touch of decor and not overwhelming.  You can see that a few small cross-stitch pillows will look great in there.

If you have someone that is inclined, there are Youtube videos that shows how to make dough bowls.

So that’s what I hope to be working on in the next few months…getting my dough bowl in tip-top good-looking shape.  When it comes to doing things for myself, I’m always super slow.  I honestly started looking for dough bowls shortly after Buck hung the television in my living room.  That’s over six months ago.

I’ll make sure to show you some pictures when it’s looking how I want it to.  Thanks for asking the question Paula…