On Tuesday I had three of the grandkids at my house.  Kelli had a doctor’s appointment so had Georgia.  Kalissa was an owl nurse (meaning she worked the overnight and had to sleep in the day as owls do) so I have Carver and Gannon.

We had a busy day.  Carver and Georgie are high maintenance and anyone watching them needs to be on their toes.  Gannon is chill and mellow.

I snapped a few pictures of our day and wrote down some of the funny things Carver said throughout the day and I thought I’d share them with you.  Here is Georgia.  A blog reader had given me a bunch of quilt magazines.  They were on the table and as I’ll often page through one if I’m eating alone for a meal.  The one of top happened to be an old copy of American Patchwork and Quilting.  Georgia grabbed it and starting paging through.  Look what she stopped on.

If you’ve read the blog since back in June of 2015, you’d know that I designed this quilt and Kelli sewed it. 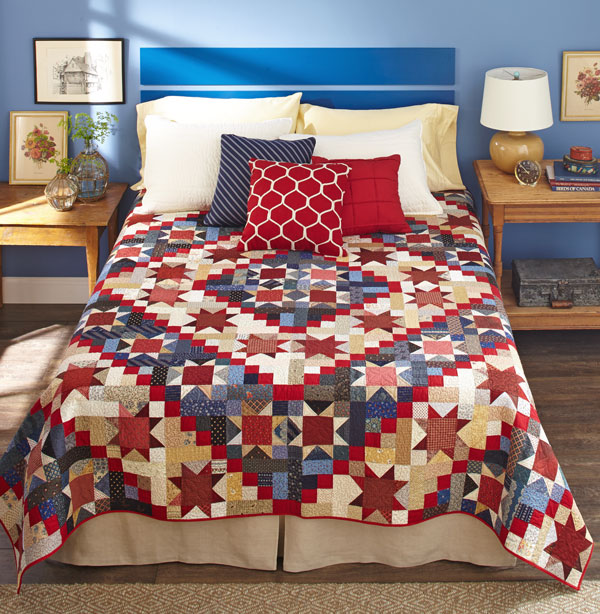 You can read the Cinderella story behind this quilt HERE.  I went from not liking it, to loving it!

It’s so funny, she had been turning and turning pages and that’s the quilt she stopped on and really looked at.  Too cute.  It was published in 2015.  At that point, this little girl wasn’t even in our imagination.

Carver was so cute.  At my house, he’s not allowed to say “Duh”.  Kalissa discourages it too.  So he came and said to me, “Joey, do you know what Grandma Dee Dee said to Papa Merril?  She told him “duh”!”  So cute.  He’s soon to be four and telling on his Great Grandma.

Later Carver and I were talking.  Kalissa and Craig decided to send him to preschool.  I asked him about it and he said, “I think I’ll be a little shy there.”  I went on to tell him all the other kids that would likely be there and told him it’s okay to be shy for a little bit but then he needed to not be shy.  He thought that was okay.  Then he said, “I will have to wear a mask there.”  I said yes some of the time.  He said, “Yes Teresa Greenfield said I’d have to wear one.”  For those of you not from our area of Iowa, Teresa Greenfield is a candidate running for office.  There have been tons of commercials on the television about her.

Later I was holding a piece of paper that had the Fleet Farm (a Midwest farm store) on it.

He happened to glance at it and said, “Mommy and me went shopping there.”  Oh my…I can’t believe he put that together!

The kids love being in the garden and I let them….

They were very into my flowers.

The kids loved my black-eyed susans.

The highlight of the day was in the early evening.  On a whim I turned Carver’s up so they wouldn’t touch the ground and put him on his bike and sent him to try to ride with no training wheels.  Kelli took a quick video of him.  He did so good.

He had several good rides and then did a pretty big wipeout then he was done.  Overall, I think he had the hang of it and then freaked himself out a little after the fall.  He’s young to be riding with no training wheels so it’s no big deal.

I LOVE his training wheels and highly recommend them.  You can find them HERE on Amazon.  By just pulling a pin I can raise and lower the wheels.  We don’t have to completely take them off.

We had a good day…lots of fun.  It was one of those days that if someone asked, “What did you do today?” and you’d be hard-pressed to say anything…as we really didn’t do anything but somehow it added up to be a really great day.  It was a really good grandma day.

23 thoughts on “A Day with the Grands”