P&G asked if I would do a little promo for one of their products and I jumped at the chance to promote their Duracell Batteries.

Six months ago if I needed batteries, I would buy whatever was cheap or on sale.  After my son Buck was wild land fire fighting in Idaho, that all changed.

Here’s a note from Buck: “I was with the MOCCII group which is a interagency fire group including members from IA and MO.  We were called out mid September to the Payette National Forest in Idaho.  When we arrived and got out our assignments and additional gear.  We were issued Energizer batteries to use in our radios. Bendix King radios are used almost exclusively in the Forest Service for their reliability and their range. When you are on a mountaintop in the middle of the woods there are not a lot of places to charge your radios so we were issued “clam-shells” that held 8 AA batteries. Normally, 1 clam-shell would run about a day and a half but several guys started having trouble with their batteries after just 8 hours on the mountain. Our crew boss (the guy on the radio the most) ran through 3 clam-shells in 17 hours. When you hike up and down a mountain every day carrying a 30 lb pack, 8lb tool, 20lb chainsaw, and on some days extra hoses and hardware that can be up to 30lbs itself, and an extra pound of batteries is a real pain. On day 8 we were called off the mountain early to go into town and shower. We managed to find a gas station/A&W in town we stopped at and bought the store out of Duracell batteries hoping for a solution to our battery problem. Problem solved, the Duracell batteries lasted all day and up until noon the next day (as they should). Next summer when I go out,  I’m going to bring my own batteries out there especially for my headlamp.  The batteries I buy will be Duracell. Many of the other guys said they are doing the same.” 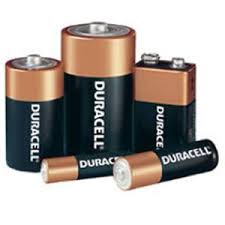 P&G is offering some great deals for people who want to shop online at their estore.  Here are a couple of their deals….

15% off on a first-time order from a new customer, using promo code: A9Z-MN5-KY3-ISA

A sweepstakes.  Who doesn’t love to win??

If you are looking to purchase batteries you can find the page for that here for AA and here for AAA.  For all batteries, here’s that link.

If you’re looking for batteries, Duracell’s are the one I’d pick.

4 thoughts on “P&G and Duracell Batteries”